David Dunning on the Dunning-Kruger Effect

David Dunning on the Dunning-Kruger Effect 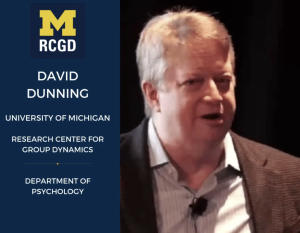 “The beauty and the terror of the internet,” social psychologist David Dunning tells interviewer David Edmonds in this Social Science Bites podcast, “is that there’s a lot of terrific information, but there’s also a lot of misinformation and sometimes outright fraud. People often don’t have the wherewithal to distinguish.”

David Dunning, a professor of psychology at the University of Michigan affiliated with the Research Center for Group Dynamics, discusses the Dunning-Kruger effect and the #DoYourOwnResearch approach in the context of the internet, AI, vaccine hesitancy, and more in an interview with David Edmonds. Edmonds is a Distinguished Research Fellow at the Uehiro Centre for Practical Ethics at Oxford University.

Dunning is best known for describing the Dunning-Kruger effect, which helps explain the human tendency to greatly overestimate their own knowledge or competence. Across various domains, they found it is often people who are the least skilled who are the most overconfident because they lack the skill needed to judge their own skills accurately. Dunning and Kruger were recently the co-winners of the 2023 Grawemeyer Award in Psychology for their work identifying this cognitive bias.

Social Science Bites is produced in association with SAGE Publishing, the world’s leading independent academic and professional publisher and the parent of Social Science Space.